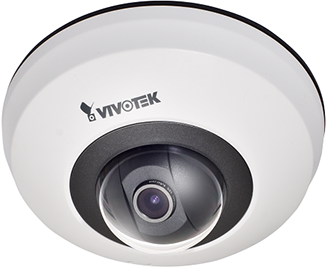 Previously, we’ve looked at the D-Link 5222L and the Hikvision IR Mini Bullet Cam which were both solid IP cameras. Now we’re going to take a look at the Vivotek PD8136. We’ll take a look at the Design & Hardware, Configuration, and its Performance.

Design & Hardware:
This is a 1 megapixel H. 264 camera that supports 30fps at 1280×800 resolution, a micro SD/SDHC card for local storage, and PoE (power over ethernet). If you’re looking for a pan/tilt dome network camera for your office or retail space, this might be it. The camera has pan/tilt features, and is also capable of looking around at 180 degree horizontally, and 80 degrees vertically.

The camera has a sturdy design with a solid outer-shell, as well as a thick glass that protects the camera’s lens. In terms of durability, you’re definitely getting what you’re paying for. One of the biggest buying factors is how the glass casing that covers the lens is reflective, which makes it difficult for anyone to know where the camera is pointing.

The camera’s size is small, making it very portable. If Vivotek were going for a low-key dome camera, they’ve succeeded. These won’t stick out like the Hikvision Mini Bullet cam.

Configuration:
Going in the camera’s configuration, Vivotek included the option of changing the camera’s video orientation, allowing the user to turn on a “Flip/Mirror” effect. This is useful if you’d like to place the camera flat on a surface instead of a ceiling.

Performance:
At 1280×800 and 30 fps, pan/tilt controls, and 12x digital zoom, the camera gave me a good amount of flexibility in the amount of room it can cover. The video feed is clear and colors are vibrant, allowing me to clearly see faces even in far distances. The camera’s lens can cover a good amount of ground vertically, but horizontally its coverage is average. I expected its lens to cover a slightly wider angle.

The built-in microphone is definitely a huge plus. From my testing, it can detect sound from up to 30 feet, which can be very useful when you’re monitoring at night.

I had an easy time setting the Vivotek camera on Camcloud. The Live View feed was very clear, allowing me to see exactly what was going on in the office remotely from my home through the Camcloud app, while the videos in the Timeline were playing clearly.

Verdict:
Overall, the camera does its job well. I could’ve gone with a bit more customization with its configuration, but its triple window motion detection proved to be helpful. Given that you’re likely to attach this type of camera on the ceiling, a big draw is that it’s difficult to tell where the camera is pointing. This is a stark difference compared to the Hikvision Mini Bullet cam, which despite having a more vibrant video feed, it’s extremely easy to tell where the camera is pointing towards even at far distances. The Vivotek PD8136 is definitely more low-key.

If you’re looking for a pan/tilt dome network camera for your medium-sized office/retail environment, this would make for a solid choice.

Looking for an affordable video monitoring service with cloud storage? Give Camcloud a try and sign up for a free plan! It only takes 2 minutes to set up.